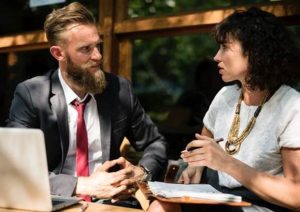 It is a common misconception that just because parties have separated, they need to fight it out in Court. This is simply not true. Some parties walk into our office having already reached an agreement and just wish to formalise the agreement to make it legally binding. Others need a little guidance to help them negotiate an agreement between them and their ex spouse.
The amount of guidance we provide depends on the type of issues in dispute. Sometimes negotiations are short and sometimes they can take a long time. Regardless of how long the negotiations take, often the best agreements are the ones that the parties have a say in, whether it is the best agreement possible or simply one they can live with. This is a dignified divorce. By reaching an agreement with your former spouse, you can save considerable time, funds and emotional strain than going to Court to fight it out.We help parties reach an agreement through negotiations directly with the other party of their lawyer. If the parties still need some help, mediation can be held where a specially trained mediator can help resolve some or all of the issues and encourage the parties to reach an agreement.It is our goal to minimise the emotional damage between separated spouses, particularly if there are children involved. These parties will someday have to be in the same room to celebrate graduations, weddings and the birth of grandchildren. Whilst negotiations can in some instances take a while, say a number of months, it is far better than being in Court, which can presently take 3 to 5 years if you are dividing property. If the dispute is in relation to children it can take 1 to 2 years. That’s a long time to be fighting with your former spouse and being on the receiving end of sometimes nasty letters from his or her lawyer.

If of course your former spouse does not want to participate in negotiations, is hiding assets or about to sell significant assets, we would likely recommend that you do fight it out in Court so to speak. We have the experience to protect your interests and do not shy away from Court action, when it is needed. Just because a matter is being fought in Court, does not mean the parties lose their ability to still reach an agreement. The vast majority of matters before the Court do resolve before a Judge makes a determination. So even if you do have to go to Court, it is still possible for the process to leave you and your former spouse with your dignity in tact and hopefully with less resentment in years to come.

If you would like to try and have a dignified divorce and resolve all matters with your former spouse without having to fight it out in Court, contact Kennedy Spanner Lawyers, your trusted family lawyers.